Fancy Dance is a juicy, hazy, fruity New England Style IPA and is brewed as a tribute to the most popular style of Native American dance seen at modern day pow wows. This triple dry hopped hazy IPA showcases Mosaic, Loral and Ekuanot hops bringing a huge punch of citrus and tropical fruit flavors to your pallet.

Lighthorse IPA is a hazy, juicy and fruity session style IPA. At 5.1% ABV, this triple dry hopped beer is easy drinking and packed with hoppy goodness while leaving you with the ability to drink a few more. This beer is all about the hops. We used Simcoe, Comet and showcased an old favorite, Amarillo, in the dry hop.

A well balanced, smooth, medium bodied ale, Mosquito Hawk is a reliable choice to blend with any meal. A combination of Victory and Munich malts give this beer a distinct biscuit and nutty characteristic. Flaked oats are used to add even more mouthfeel. Amarillo hops bring a nice blend of orange citrus notes to a beer that hasn't changed since our homebrewing days.

Featuring Oklahoma sourced barley, Oklahoma Gold delivers a slight tropical fruit note to the nose with a semi-dry finish. Well balanced and highly drinkable, Oklahoma Gold is the "go-to" beer when looking to quench a thirst.

The 49 is our take on a classic style. Brewed with flaked oats for a creamy full body, roasted barley for a slightly roasted coffee flavor and pale chocolate malt for that smooth chocolate taste. The 49 is named after our late night parties usually held in a secret location after powwows. This recipe originated with our founders late father and the story behind it became the inspiration for launching Skydance Brewing Co. 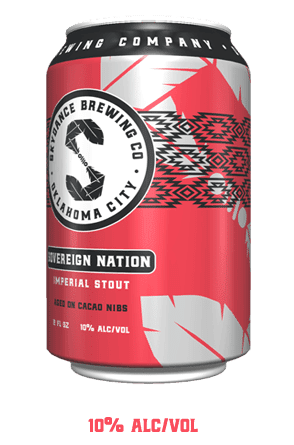 In 1777 the U.S. government began acquiring land from indigenous tribes through treaties signed with tribal leaders. Though routinely broken, the signing of these treaties recognized the tribes as Sovereign Nations with the ability to self-govern. Today, the reassertion of treaty rights and tribal self-determination is evident in renewed tribal political, economic and cultural strength. Like our tribal nations, Sovereign Nation Imperial Stout is inherently strong and bold with the ability to withstand the test of time.

Bright, fruity, and delicious! This spring seasonal release is a crisp, light bodied refreshing wheat beer brewed with raspberry and orange puree. It’s time to hit the patio and Razz-O is the perfect companion! 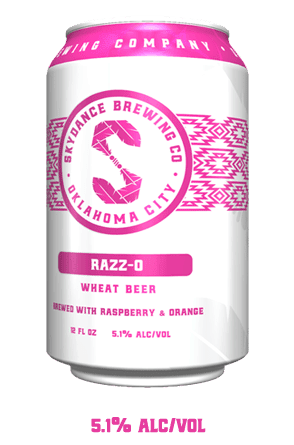